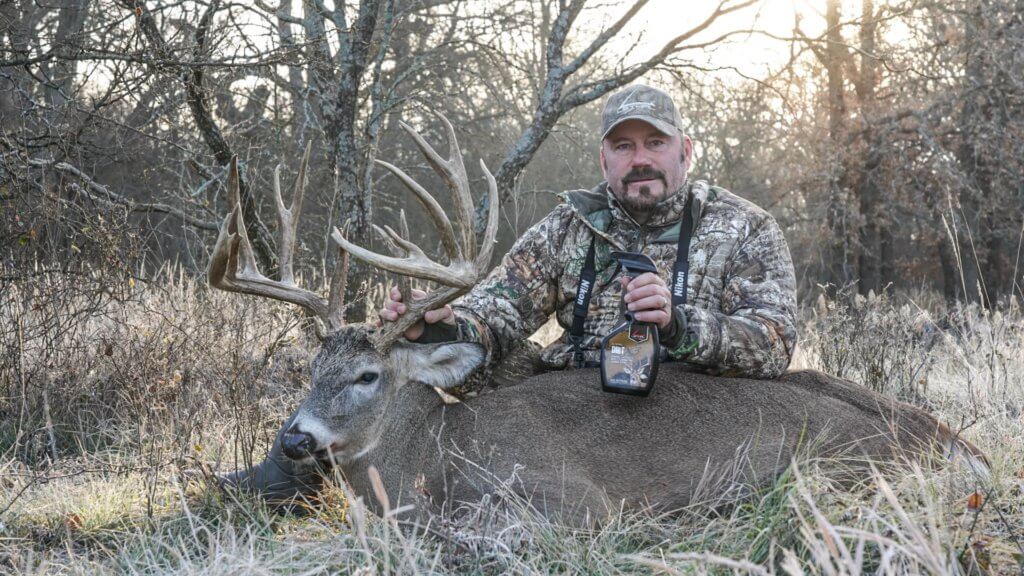 This story is not the typical Story of a giant buck taken by Hunter. This is not a deer that I have been hunting for a long time. This is a story about a deer that nobody knew about. I headed to Texas to a piece of property that is privately owned and not used for outfitting. This property in the hill country of Texas is owned by one of our sponsors who had invited us out to hunt.  This property was strictly bought and used for inviting friends over to hunt. They had limited stands that were preset.  And basically no trail cameras. There were a couple on a few feeders.  There are several outfitters and preserves around this property. In this area is known for some really exceptional books.

So the first thing I did when we arrived Was to put up some Browning trail cameras. After one day of hunting in a stand and seeing a couple of deer in the 120 to 130 class we checked our cameras and found a really nice buck that I was guessing around 160. So this buck became our target.  After three days of hanging in trees with my Xpediton bow and not seeing any shooters my confidence was starting to fade. But we had seen another really good 10 Pointer off in the distance on some big wheat fields. So we put down the archery equipment and picked up the Thompson Center.

On the early morning of the fourth day we had our coldest day yet. It was in the low 20s. And frost was everywhere and deer movement was on the rise. We had a 140 class book come out just on the edge of camera light but we chose to wait on better lighting thinking he may stay in the area. Well we were wrong! He met up with a doe and left the area. So while I’m sitting there kicking myself in the butt we catch some movement coming to the left side of the stand and it was a demo and she was looking behind her. It was obvious she was being chased. And then before we could barely blink her eyes they were three Buck showed up in pursuit of this though with the one that’s closest to her being the biggest but by far. This was the much larger deer that we had saw in the distance in the wheat field.  Well me and the cameraman are trying to get in sync the bucks  comes in straight downwind from us and they all freeze. He is staring right at us and I cannot move nor can my cameraman. This big boy starts blowing looking right at us ( he must have caught some movement) we thought it was all over… And right as he began to exit stage right the hot doe  he was pursuing Decided to exit stage left and he and the other bucks turned and began to follow her.  They ran through some thick brush and gave me no clear target. But when I turned and looked back where he ran from, there was a buck standing there staring at them as they left the area . There was no doubt this was a giant. Cody my cameraman was able to get moved and get the camera on this giant. This buck just started to leave when MY TC compass laid him to rest.  This giant was standing straight down to Wind from us as well,  If it had not been for our lethal spray and doing the job properly upfront we would’ve never had an opportunity like this. All the deer would have blown and left the area so fast none of this would’ve been possible. But because Our scent was suppressed so much what sampling they got was not enough for them to think we were close enough to be of any danger.  The first buck stopped 16 yards from the stand completely downwind. Thanks Lethal for handing me my biggest trophy to date.